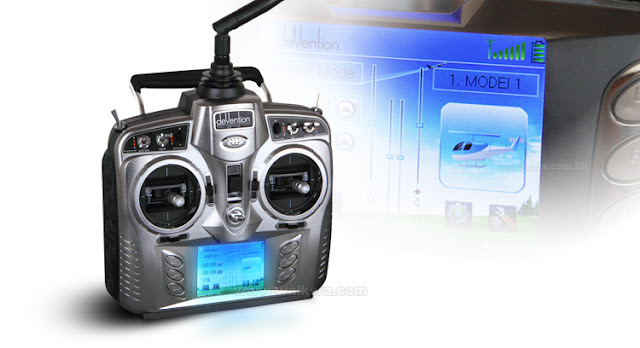 The Devo 8s is really easy to programme. Everything is very intuitive and very easy to find. I was very pleased with the touch screen, it was sensitive enough without being over sensitive and it does make it much quicker and easier to navigate than conventional means via buttons or buttons and scrolling mechanisms. 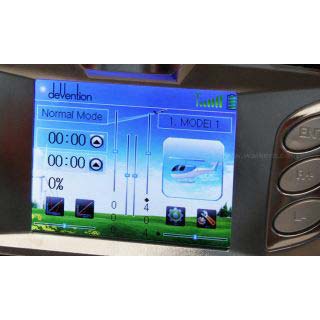 Nearly everything was already set as per the V200D03 manual. The setting programmed in give a good starting point for general flying and advanced aerobatics. From these they can be fine tuned to individual preference. They can be smoothed out to tame the helicopter down for novice pilots (together with adjustments made to the receiver/gyro unit) or it can be tuned up for more aggressive 3D flying. All the parameters that you want can be readily adjusted, and it is so easy to do so with the new touch screen.

The only settings that I initially changed were the Power Amplification (which was set to the maximum +20 dBm, where the manual recommends it to be set at 0 dBm), the sound (personal preference, I’m not a fan of it bleeping at me every time I press a button so I turned it off) and then finally I activated the throttle hold. As provided the transmitter is set up for the Rudder D/R switch to control the rudder dual rates. I changed it to operate the throttle hold. I like to have this function:

1)For safety, so that I know I’m not going to power the main blades accidently at the wrong time.

2)If an RC helicopter crashes in idle up mode (Flight Modes 1 and 2, or stunt mode as it is otherwise known) then you want to quickly be able to cut the power to the rotors to minimise damage. Again, that is a personal choice but one that is widely followed.

A feature of the Devo 8 that I really love is the ability to change the gyro sensitivity at the flick of a switch. Above the cyclic (aileron/elevator) stick on the right side, by the Aileron Dual Rate Switch is a 3 position Mix Switch. 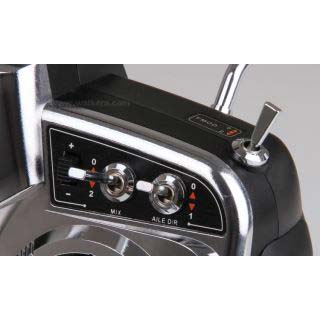 This allows you to select between 3 pre-set gyro sensitivity settings. These are factory set at:

The higher the percentage the more sensitive the gyro is and the faster it will react to movements of the helicopter not resulting from stick inputs. Thus the lower the percentage the softer the response of the helicopter and the more stable it will be in the air. The beauty of this is that if for example the wind picks up you can easily reduce the gyro sensitivity to increase stability in the wind and make it more flyable.

It also means that as your flying skills improve you do not necessarily have to start making adjustments to the receiver/gyro itself to allow you to progress to more agile helicopter performance – useful when you are transitioning, as you can try for a while with the helicopter flying in a more aggressive style and then flick it back to your usual more balanced position to recompose yourself; then have another go with it flying more agile.

The factory settings on the mix switch can be readily changed through the touch screen menus and the stability/agility of the helicopter is always a product of what is set in the transmitter and the settings made on the receiver/gyro itself. Thus if you increase the sensitivity on the gyro through the unit on the RC helicopter, Pos 0 will represent 75% of that, with Pos 1. 70% of that and Pos 2. 40%.

The beauty of a transmitter like this is that the permutations are endless and you can fine tune each helicopter to your individual preferences and flying style. The settings for each helicopter are then stored under a separate profile selectable from the touch screen menus.

It is a great transmitter for a great RC helicopter. Buy it here.